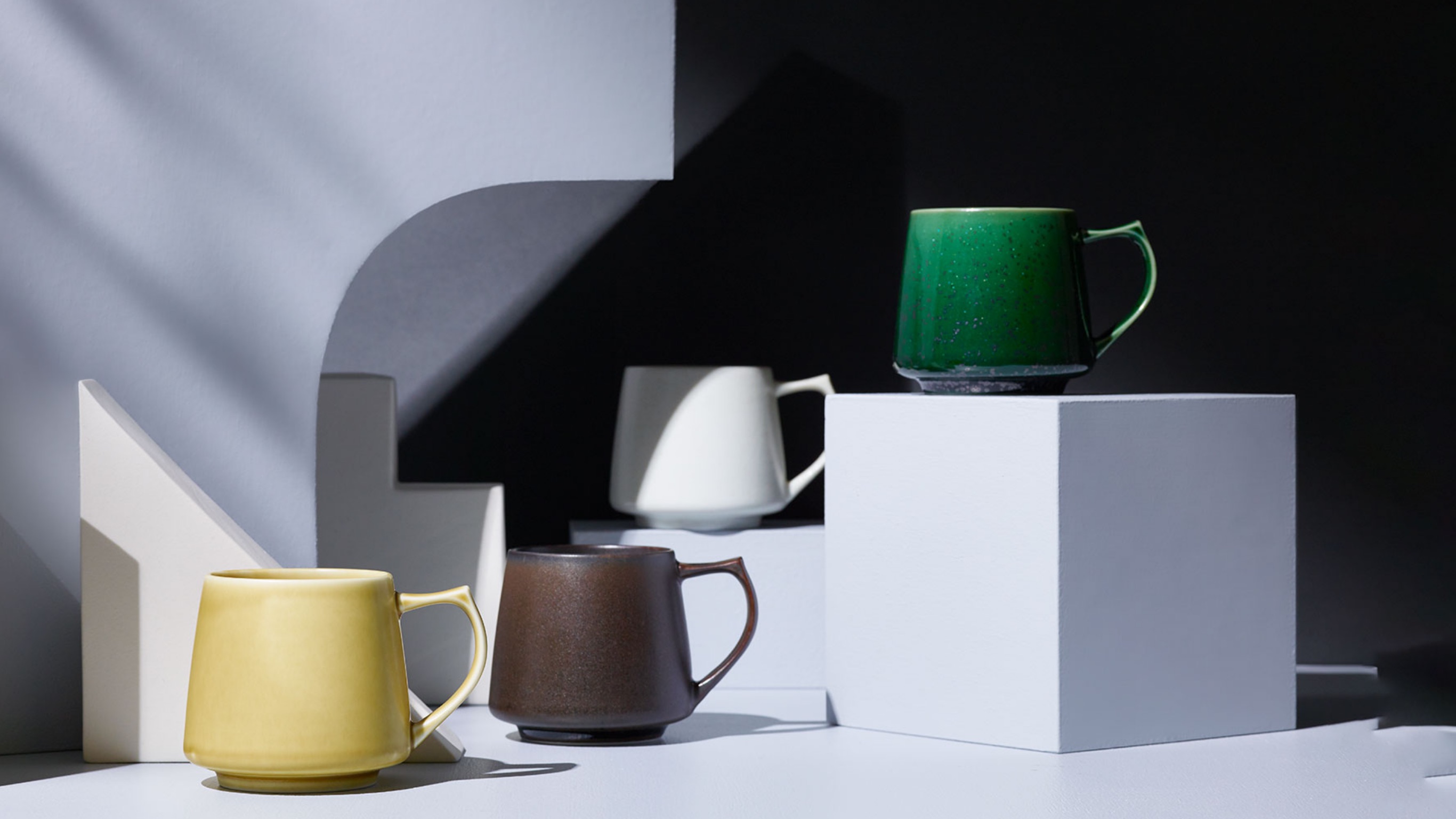 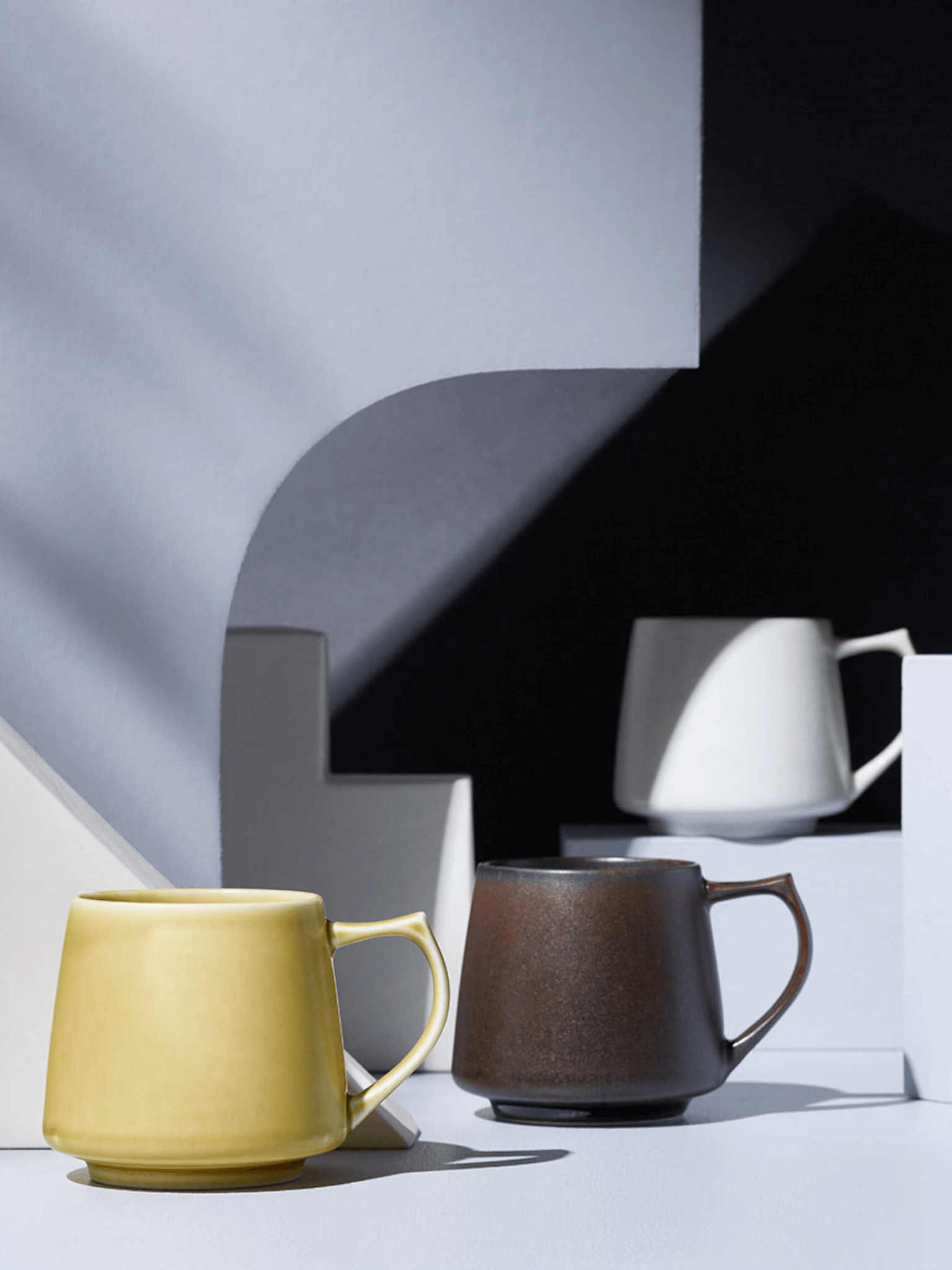 It is all about bringing the best aroma

Kiki Mugs are created with a meticulous design process, all for you to fully enjoy the distinctive aroma and flavors of specialty coffee.
They have a unique shape, like a wine glass with a gentle texture. As your lips touch the edge of the cup, it is as if you are embraced by the rich aroma and flavor. 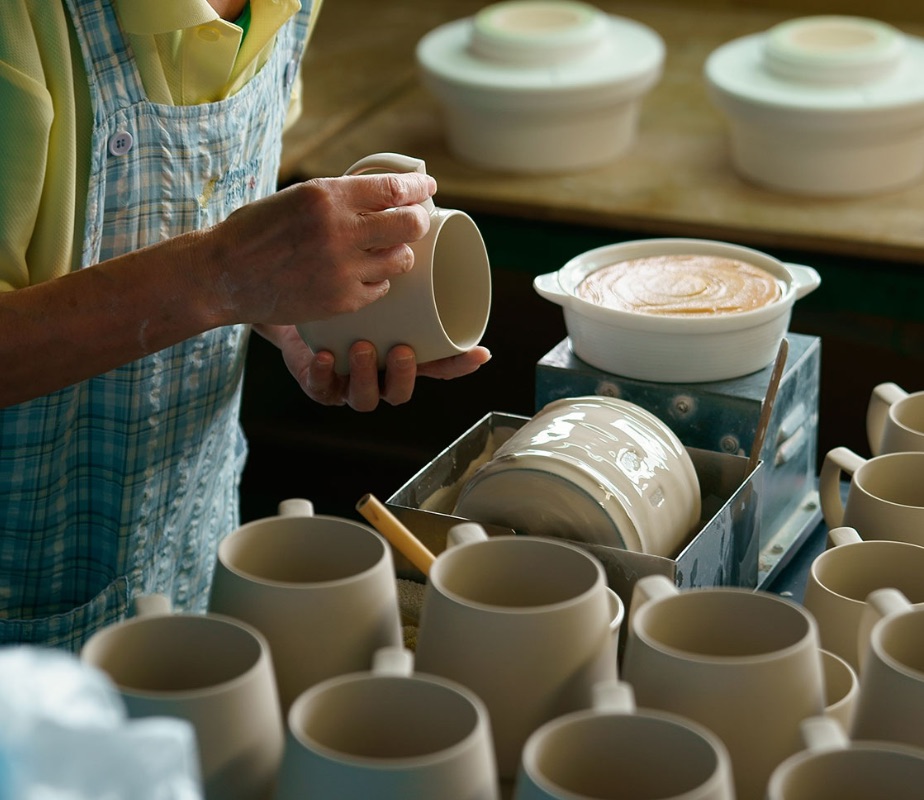 Meticulous craftsmanship
In order to create the unique pinched shape, multiple moulds are used for each product. This means that the joints need to be smoothened by hand hence, it takes longer and is more involved than the construction of ordinary mugs.
Wine glass shaped design
Having the narrow rim encourages coffee to flow into the mouth smoothly, allowing the aroma to linger and the flavors to be enjoyed in every part of the mouth. 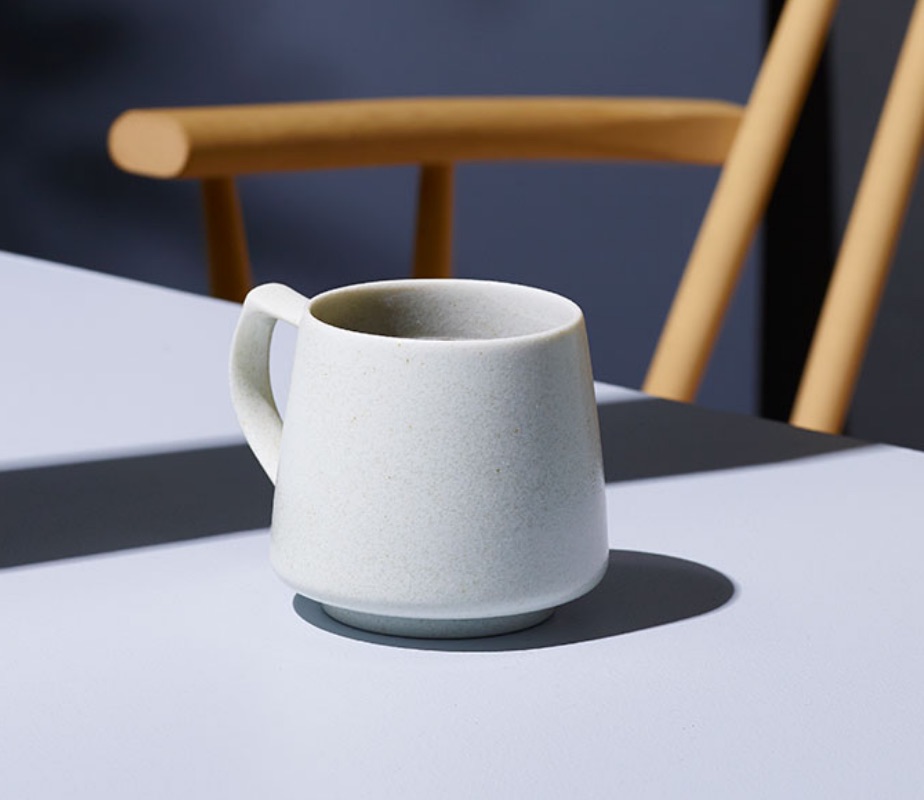 Emphasis on aroma
The wide bottom and spacious middle of the mug, efficiently bring the aroma out of the coffee. 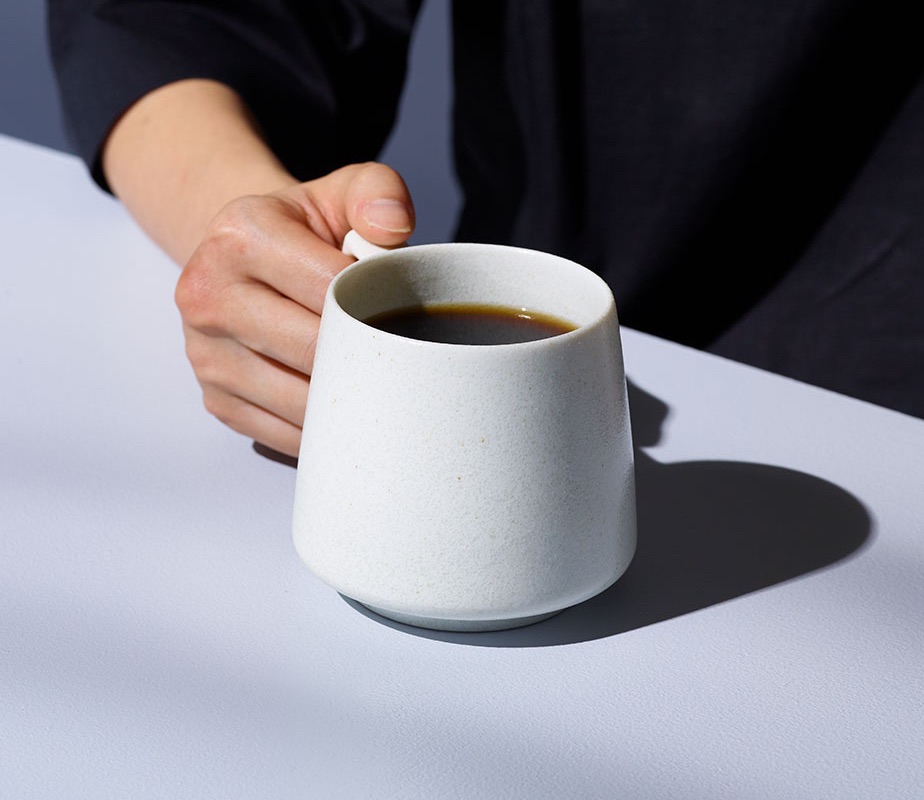 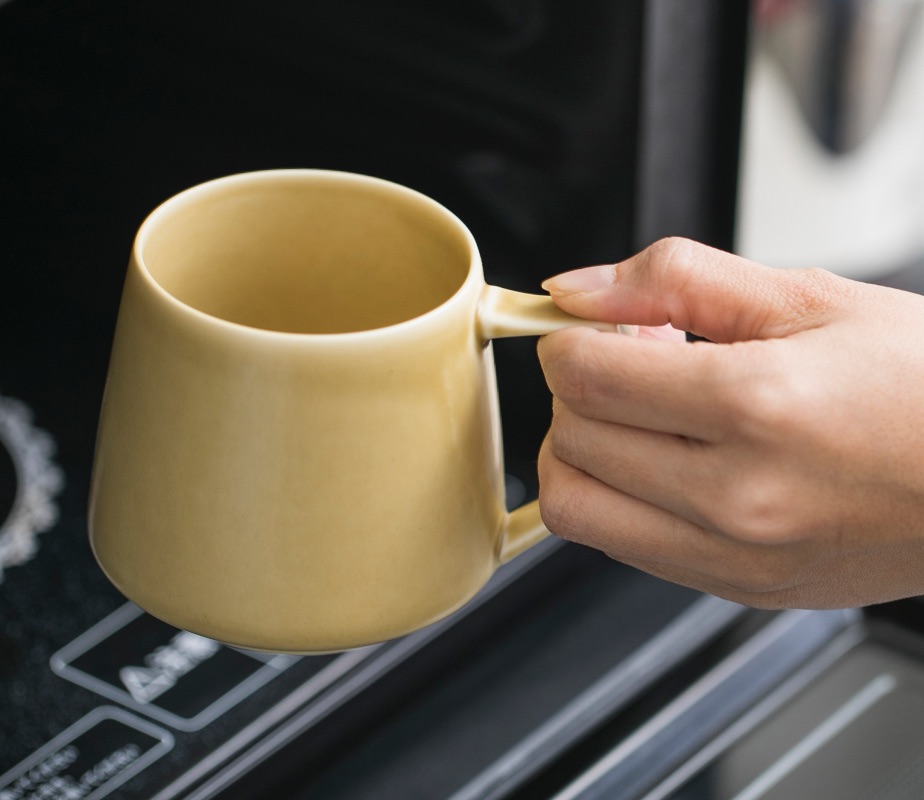 There are various kinds of Mino-yaki products, with 15 styles certified as Traditional Craft. The four colors from the traditional styles are called “Oribe”,”Shino”,”Kizeto”, and “Setoguro”. They are arranged to suit modern designs and are all available for purchase.

Oribe style was produced mainly in Mino between Momoyama and Genwa period. This style was named after Oribe Furuta, who was a tea master from Mino as this was his favorite style. The most famous design is “Ao-oribe” with its innovative shapes and patterns. Other designs include Kuro-oribe, Aka-oribe, and Namuri-oribe.

This is a kind of Oribe and was produced in Momoyama period. It is thickly painted in white, and there are small holes as well. Since it is painted unevenly, sometimes the base gets exposed. Unlike the smooth finish of white porcelain cups, each product of this style has its original look. Iron oxide is also used to paint patters.

Kizeto literally means “Yellow pottery from Seto” and was produced between Muromachi and Momoyama period. While the pale yellow color gives soft and peaceful impression, some products even have carvings, decorations, or brown/green spots.

Setoguro style is said to have been Sen no Rikyu’s favorite. glaze is still melting, cups are drawn out of the oven to be cooled down quickly to create the black finish. 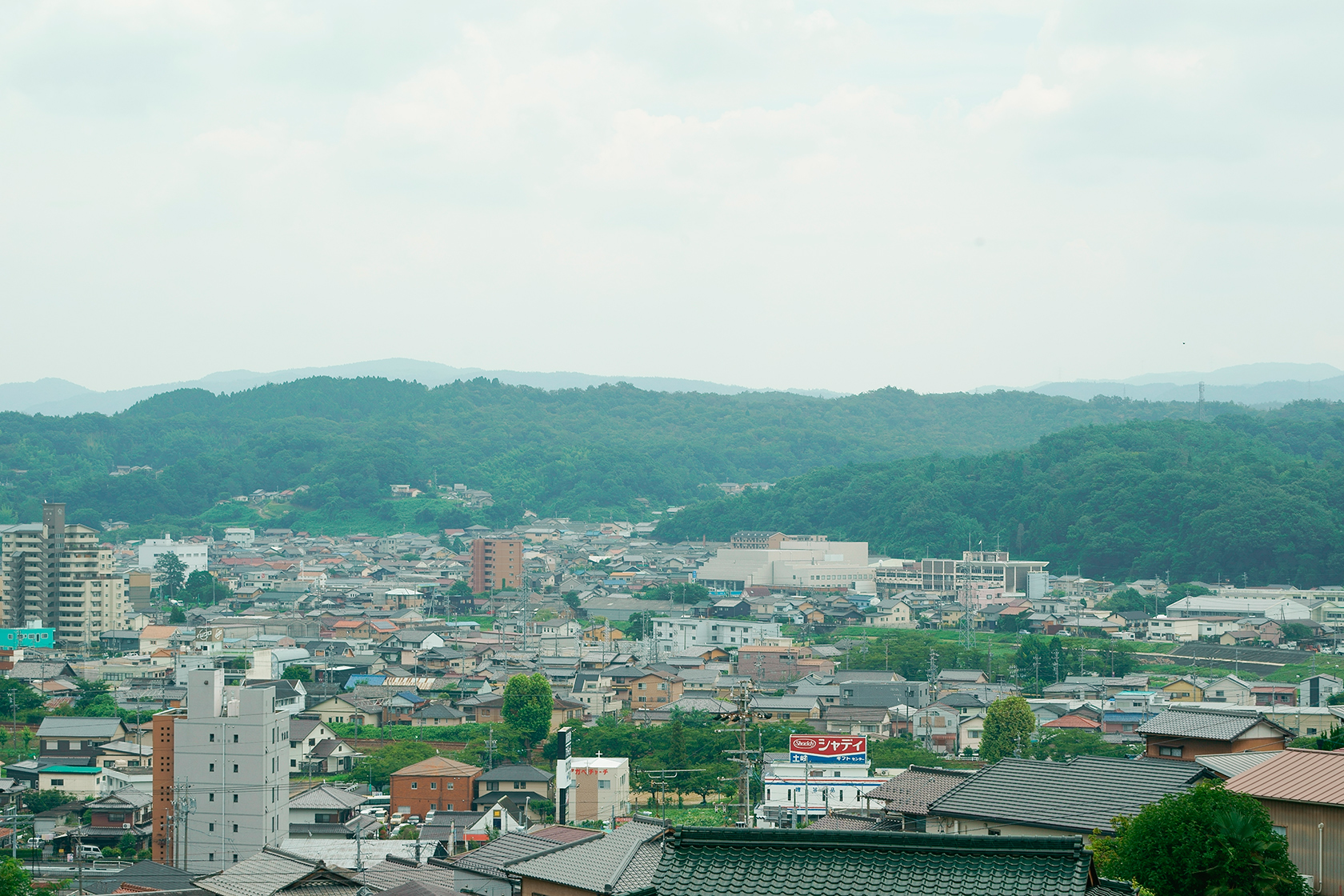 Mino is located in the south of Gifu prefecture and it is currently the largest producing region of ceramics in Japan. The history is believed to have started when “Sue ware” was introduced from Korea more than 1300 years ago. Mino pottery became famous in Heian period and some potters in Seto region started business in Mino. This was the beginning of so-called “Koseto” era. It then moved into “Seto/Mino” era when they started using the bigger ovens. In Momoyama period, Moni-yaki pottery blossomed with the development of tea ceremony, and some potters in this “Seto/Mino” era started to develop a new style of pottery. This was the golden era in the long history of Mino. During Edo period, the number of ovens in each area became under the strict control with ownership system in place. At the same time, porcelain products came into the market and some regions even developed unique local products. Mino-yaki products became more famous in Meiji period when they got distinguished from Seto-yaki products in the market. Gosuke Kato, Danji Nishiura were some of the celebrated potters at the time and their legacy was passed onto other Mino potters of the modern time such as Toyozo Arakawa, Kagemasa Hayashi, and Keisyu Kato (all holders of Important Intangible Cultural Assets). Other potters who made some influence on the Mino pottery industry are Hajime Kato, Fujio Koyama, andSakuzo Hineno.

These potters, with their skills and attitude, haveset the high standard of Mino-yaki products, and there are more individualistic new products being released at present.

Difference between porcelain and ceramic 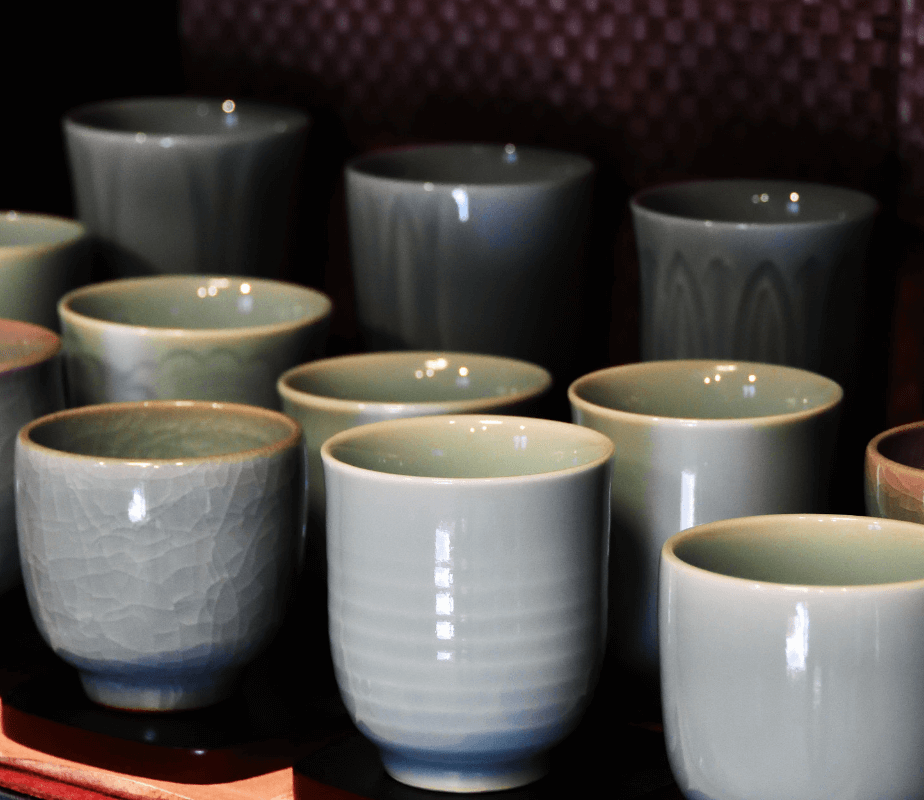 Porcelain (Jiki)
Made out of pottery stone, feldspar, and silicon, porcelain is baked at 1200-1400℃. It doesn’t absorb water and transmit light. Mino-yaki, Arita (Imari)-yaki, Kutani-yaki, Tobe-yaki, and Hasami-yaki are well known styles.
Ceramic (Toki)
Made out of china claykaolin, feldspar, and silicon, ceramic is baked at 800-1200℃. It absorbs water a little bit and doesn’t transmit light. Seto-yaki, Karatsu-yaki, Tokoname-yaki, Shigaraki-yaki, Ogi-yaki, and Kasama-yaki are well known styles. 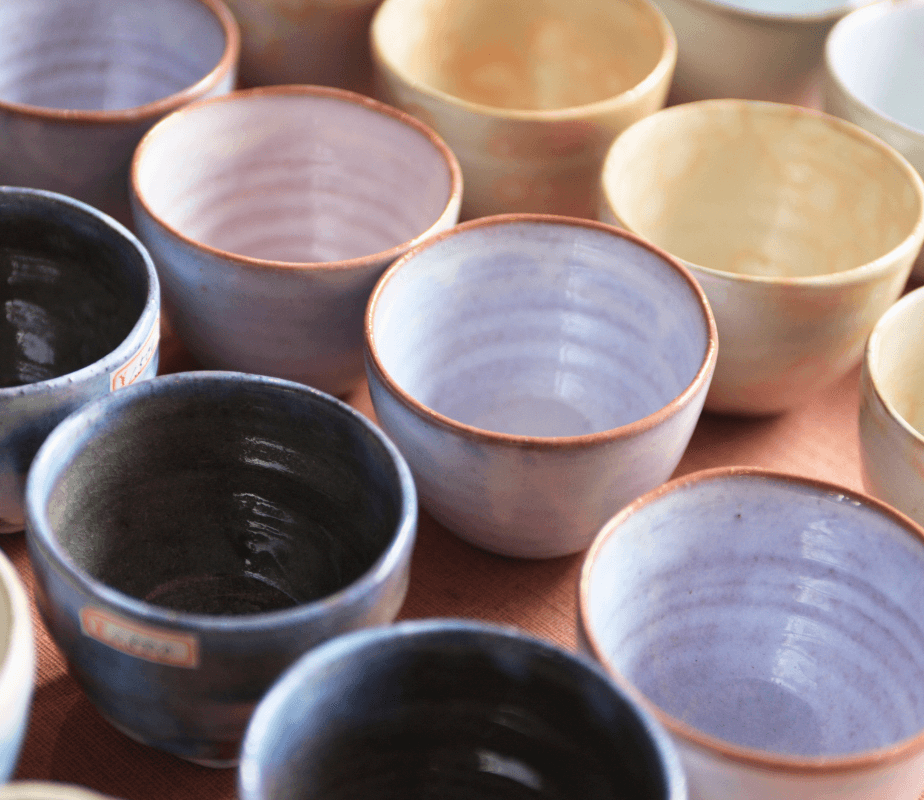 Kiki mug is designed to fully enjoy the distinctive aroma and flavors.

Mino-yaki is made in Toki City, Gifu Prefecture, the largest ceramic production area in Japan.

The mug body captures the aroma longer and brings it to the nose.

They are porcelain mugs, yet have a unique texture and color like classic Mino-yaki. 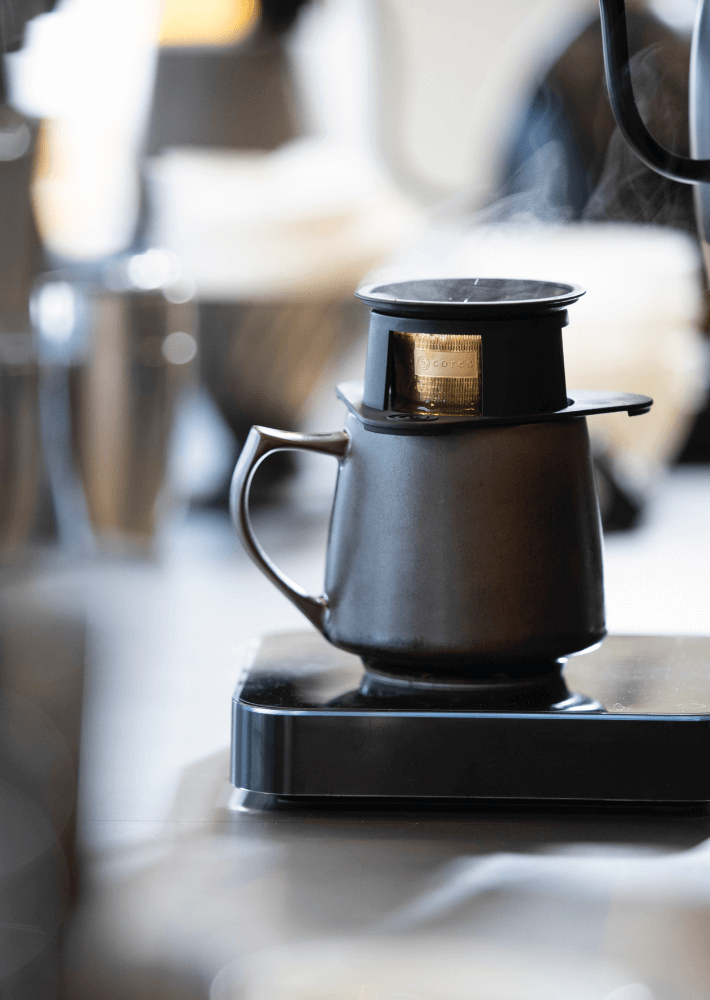 The stores where you can experience Cores
Cafes that has confidence in beans and roasting are choosing Cores.
You can experience the oil floating on the coffee surface and its taste.
Stores handling Cores